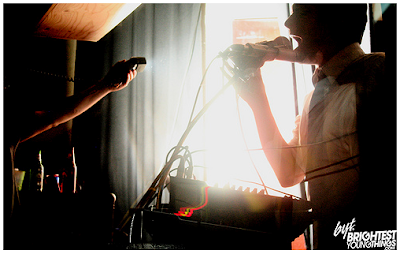 http://www.brightestyoungthings.com/live-dc/amazing-live-dc-bluebrain-comet/
Also has some great pictures.
UPDATE: Here's another review of the show from 'BandsInTown':

It was a dark and stormy night last Saturday when the Holladay brothers packed the back room of Comet Ping Pong in Northwest D.C. making one of their first public appearances as Bluebrain. Formerly of the band The Epochs, the brothers have returned to their native city bringing an exciting multimedia project home with them.

After an opening set by Wilson Kemp, Ryan and Hays took their traditional positions at podiums on either side of a screen. As soon as the room went black, things got loud. The layered tones of Bluebrain’s music could be felt from the inside out as the screen became a canvas for projected images that ranged from morphing faces to helicopter footage tumbling toward a landscape. The images complimented the dynamic aural mix- a frenetic but totally danceable wave of beats, samples, and vocals that encompassed Comet like a tsunami. Over-stimulated by the visuals and crowd, the lightning through the shabby skylight in the ceiling, and the Holladay brothers twiddling at their twin podiums, it was like being involved in an experiment that went very very right. There’s something wild in the works, and any time you get a chance to dive into a Bluebrain show, go for it- you’ll love the sensation.

Their album entitled Soft Power will be out this fall on Lujo Records. In the meantime,listen here to singles from their EP Ten By Ten, available now on iTunes.